Matrix Wiki
Register
Don't have an account?
Sign In
Advertisement
in: Males, Agents, Characters in The Matrix: Path of Neo,
and 3 more
English

Agent of the Matrix

Bugs
Neo
Tosk
Trinity
Agent White was an Agent that appeared in The Matrix: Path of Neo level, Security Guard. He pressured The Security Guard, a potential redpill, to subdue and arrest Neo. When the stressed and confused Security Guard couldn't follow through with his task, White attempted to kill him to ensure The Guard wouldn't be recruited by the Resistance. Neo eventually defeated White and freed The Guard.

White was later assisted by Agents Bird and Ash with tracking down and killing a group of Resistance members (including Tosk). Possessing a local woman as she was about to be hit by a truck, he jumped out of the way in time. The Agents brought assault vehicles and closed off the area. Their mission was successful in killing the Resistance members, although falling debris from an explosion cut off White's arm. When he left the woman's body, she saw everyone dead and herself mutilated.

Sixty years after the end of the human-machine war, Agent White was present as one of the members of the Agent trio lead by the recreation of Agent Smith inside a modal written by Thomas Anderson (Neo's identity while being subdued inside the seventh version of the Matrix) alongside Agent Jones. White's position replaced Agent Brown.

Inside the modal, White served a similar role to Brown, chasing the modal's version of Trinity through the Lafayette onto the rooftop. However, unlike the original events, the Agents captured Trinity. Bugs spied on the fight, but was discovered by a surveying police chopper and came into contact with the Agents, who tried to kill her. On street level, White and Jones took possession of police officers, forcing Bugs to hide inside a key shop. Initially finding the key shop empty, the Agents soon encountered Smith, who had in the meantime accepted a redpill from Bugs and was showing visible aftereffects. White and Jones realized Smith had been compromised, chasing Smith and Bugs through a derelict building, but they were unable to prevent the two from escaping the modal.

Later, the modal was deleted, presumably by the Analyst. As a result, White was also deleted. 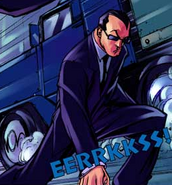