"Hands Around My Throat" by Death in Vegas

Beyond is an episode of The Animatrix written and directed by Koji Morimoto. It follows a teenage girl, Yoko (Hedy Burress), looking for her cat Yuki. While asking around the neighborhood, indicatively somewhere in Japan, she meets a group of younger kids. One of them tells her Yuki is over at the haunted house, and he invites her to come to see it.

The kids have learned to exploit the glitch in the Matrix for their own enjoyment through several areas which seem to defy real world physics such as: a soda can floating mid-fall, glass bottles reassembling moments after being shattered, rain falling from a sunny sky, broken light bulbs flickering briefly (during which they seem perfectly intact), a door which opens to vast nothingness, shadows that do not align with their physical origin, and a dove feather that spins mid-air.

It soon comes Yoko's turn to experience the wonders of these glitches. The dove, whose feather Yoko had caught, takes flight in front of Yoko. She watches in amazement as the bird's graceful wings flutter in front of her, soon out of sight. Light bursts from the sky as Yoko slowly levitates to the ground, hugging herself.

There is a large open space in the middle where they take turns jumping off a high point, free-falling towards the ground yet somehow stopping just inches before impact; this proves amusing, and they seem unbothered by the inherent strangeness.

Throughout the film, short sequences show that the Agents are aware of the problem in the Matrix, showing the location of the glitch glowing red as a program scans the Matrix from the skies like a satellite. A futuristic truck is seen driving on the way to fix it and arrive while the kids are playing. A team of "rodent exterminators" led by an Agent proceed to round up the kids and throw them out.

The story ends when the girl and the kids are outside of the house the next day, which has turned into a normal parking lot. The kids try to smash bottles and repair them as before, only to fail. They find the parking lot boring and soon leave. The girl spots the floating can –one of the previous glitches– which is no longer floating. She picks it up and cuts her finger on the opened lid. Quickly dropping the can, she watches as it seemingly rolls magnetically towards the fence of the parking lot, perhaps signifying some kind of object memory. 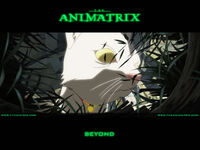 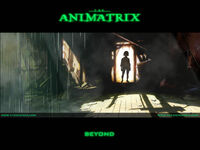