Matrix Wiki
Register
Don't have an account?
Sign In
Advertisement
in: Females, Characters in The Matrix Resurrections, Humans,
and 2 more

Captain of the Mnemosyne

Bugs is a "true believer" in the legend of Neo: she commands a rag-tag group of human Resistance members who never stopped believing he was still alive somewhere, even after everyone else gave up hope years ago. Other members of her crew include Lexy and Berg, and their Operator Sequoia.[2]

Bugs is the captain of the hovership Mnemosyne.

Bugs was born in the Matrix, a self-described "Coppertop" unaware she was living in a simulation. She worked as a window-cleaner on sky-rise buildings.

Some years ago, "Thomas Anderson" had a mental breakdown at a rooftop party to celebrate the release of his new (Matrix-inspired) video game - in truth, he was getting flashes of his old memories back. Falling into a haze of half-remembered details of his life, Thomas/Neo tried to walk off the roof of the building. Because none of the party guests could react in time to stop him, the Machines had no choice but to "freeze" the simulation, leaving him impossibly hanging in mid-air.

All of the party-guests' memories were then altered to believe that he'd been rescued at the last second - but the Machines neglected to wipe the memory of the window-washer who happened to see the event from several floors below. Bugs saw Neo hovering in mid-air, and even saw his RSI slip back into its original form for a brief moment, and this led her to question the nature of her reality, ultimately setting her on a path to encounter members of the human resistance who eventually freed her from the Matrix, particularly Niobe. Even though most people in the real world thought Neo died years ago, Bugs' brief glimpse of Neo convinced her that the Machines were hiding him somewhere in the Matrix, driving her to assemble a like-minded crew determined to find him.[3] 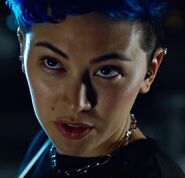 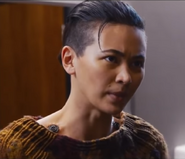 Bugs in the real world