Final Flight of the Osiris is a sequence in The Animatrix that acts as a direct prelude to the events in The Matrix Reloaded and Enter the Matrix. It was written by the Wachowskis, directed by Andy Jones, and produced by the now-defunct Square Pictures.

Thadeus, captain of the hovercraft Osiris, and his first-mate-turned-lover, Jue, are sword fighting in a Sparring program construct. They fight blindfolded, trying to strike one another shredding each other's clothes off piece by piece. Just as their battle reaches its climax, the alarm inside the construct goes off, and they are pulled out of the simulation.

Robbie, the Osiris' operator, informs them that there are thousands of Sentinels ahead of them. Thadeus orders them to turn away and the ship ends up coming out of a pipe onto the surface to discover thousands of more Sentinels congregating there, surrounding a collection of heavy diggers.

It is then that Thadeus realizes where they are several miles directly over Zion. The machines are digging down to the last human city. Collecting the data, they are detected, Thadeus orders them to run.

While fleeing the Sentinels, Thadeus orders a broadcast for a data drop in the Matrix, and Jue takes the run. The crew of the vessel fight off Sentinels as Jue tries to reach the drop point. The Sentinels make it inside just as Jue reaches a mailbox.

An old woman stands there, staring at her mail. Jue moves her aside, and the woman apologizes, saying that she was in her "own little world". The two share a polite farewell, and Jue walks away, immediately dialing the operator's number.

The Sentinels have already killed the entire crew save Thadeus, who is fighting them off with a beam weapon. Jue speaks her lover's name into the phone before everything goes dark. The Sentinels destroy the Osiris, and inside the Matrix, Jue drops dead hoping the data will reach Zion.

Together with the other eight parts of The Animatrix, it was released on VHS and DVD on June 3, 2003. To coincide with this, a print of The Animatrix was shown at the New York Tokyo Film Festival in New York City, June 2003. 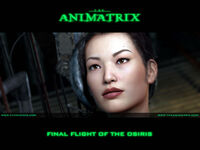 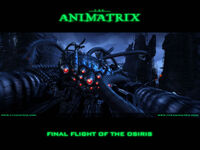