Matrix Wiki
Register
Don't have an account?
Sign In
Advertisement
in: Machines, The Matrix, The Matrix Revolutions,
and 6 more
English

Harvesters (or Fetus Harvesters) are Machines that maintain the expansive fetus fields of synthetically grown human fetuses used to populate the power plant as older humans die off or are ejected from the power plant.

The Harvesters have a hollow chute with an appendage that grabs the mature fetal sacs for insertion in the power plant, and can also be used to attack any intruders to the fields. Whether the machines collect the conceived fetus from a smaller pod under the main pod or if they create it themselves is unclear.

During the early years of the Machine War[1], Harvesters were used to capture humans and take them to Machine labs. The combat version is smaller, with spherical torso and a mounted laser. They were also armed with more tentacles that were used to slice human infantry groups into pieces and immobilize APUs in seconds. Additionally they are protected by a very effective armor that could withstand most attacks that were thrown at it.

An old crazy man imagined them to be dragons and set up a booby trap for them by using a hollow Sentinel as bait.[2]

They were also included in the Infant Training Sim, in which the Zion operative had to avoid the Harvesters while freeing an infant from the fetus fields.[3] 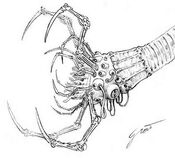