Don Davis
"Who Am I" by Peace Orchestra

Kid's Story is an episode of The Animatrix written by the Wachowskis and directed by Shinichiro Watanabe, with animation and production design by Studio 4°C, Tokyo. Kid's Story is the tale of how the Kid discovered the truth about the Matrix and entered the real world.

Kid, a bluepill named Michael Karl Popper, has recurring dreams where he is falling. After waking up from one such dream, he logs on to a chatroom, and receives a message from Neo. The following day, the Kid's cellphone goes off in class; after being reprimanded and switching it off, his cellphone rings again.

To the annoyance of his teacher, Michael answers: On the line is Neo, telling him to get out now. He is chased through his high school by a band of Agents, and ends up cornered on the roof. Asserting his faith in Neo, Michael throws himself over the edge.

Members of Michael's family and school are shown attending his funeral, commenting on how he's "in another world now". A fade up from black shows the Kid awakening in the real world to see Neo and Trinity watching over him. They remark that he has achieved "self substantiation", which was considered impossible: The Kid thanks Neo for saving him, but Neo says that he "saved himself". 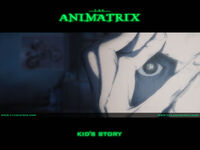 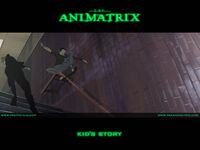