What is the Nebuchadnezzar?

I dreamed a dream...but now that dream is gone from me.Morpheus, quoting the biblical King Nebuchadnezzar.

The Nebuchadnezzar,[1] nicknamed the Neb, is the main hovercraft featured in the The Matrix and The Matrix Reloaded; it is used by the main characters Morpheus, Neo, and Trinity.

In The Matrix, the crew of the Nebuchadnezzar is searching for Neo, whom Morpheus believes to be The One. When they find him, he is trained and taken to see the Oracle. While returning from the Oracle, Cypher betrays the crew, gives the Agents Morpheus, and kills Dozer, Apoc, and Switch. Mouse is killed by a raiding squad of SWAT troopers when he is found in the hotel where he stands guard while waiting the rest of the crew's return. Neo and Trinity manage to save Morpheus from the agents, after which Neo is revealed to be The One.

The ship was heavily damaged when Sentinels invaded the ship when Morpheus, Trinity and Tank were desperately waiting for Neo to come back to the real world through a portal before discharging the EMP, disabling the ship and the Sentinels.

In Reloaded, the ship is seen again. Since the events of the first film, Tank has died, and Link has replaced him as operator. After Neo visits the Oracle, the crew goes to a restaurant called Le Vrai and takes the Keymaker from the Merovingian's captivity. Later that night, with the help of the crews of the Vigilant and the Logos, and the exile the Keymaker, Neo enters the Source and speaks to the Architect.

Near the end of Reloaded, the crew is discussing Neo's revelation about the truth behind the Prophecy. As Morpheus expresses his disbelief about the truth, the ship's Proximity Alert goes off, informing the four of the presence of nearby Sentinels. Unfortunately, the Sentinels also detect the ship via audio sensors that pick up the crew's conversations and proceed to launch a Tow Bomb at the ship.

Inside the cockpit, a hologram display shows the locations of all three:the ship, the Sentinels and the bomb. It clearly displays the radius of the EMP's pulse, and that the Sentinels are safely outside the radius and safe from its harmful effect. Neo correctly identifies the bomb and tells his crewmates that they must evacuate the ship, which they hurriedly do.

Morpheus looks back to watch his ship explode and quotes Nebuchadnezzar from The Bible, "I dreamed a dream...but now that dream is gone from me." as tears form in his eyes. Link then urges him to run with them. Neo suddenly declares they won't make it and Trinity responds that they "have to try". Neo then proceeds to declare that he can sense the Sentinels. He turns around and raises his hand, and just as the Sentinels are about to kill the four, he telepathically short-circuits all five Sentinels, disables them permanently then collapses, supposedly dead.

The Mjolnir shows up a few moments later and proceeds to pick them up. Just as the movie ends, Neo is shown lying on an operating table in the ship's med bay, with Bane(now taken over by Smith), lying on a similar table opposite his. 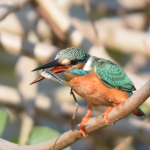