Matrix Wiki
Register
Don't have an account?
Sign In
Advertisement
in: Police, The Matrix, Enter the Matrix,
and 7 more

S.W.A.T. (an acroym for Special Weapons and Tactics) are a force of bluepill humans in the Matrix that assist and serve as enforcers for the Agents.

A SWAT team assists the Agents in the Hotel Ambush and capturing Morpheus.

In Enter the Matrix[]

The SWAT team appear as an enemy in Enter the Matrix. They appear the first time in the second level called 'Get to the Hard Line.' In this level, police cars will chase you but when one of them is driving close to you and the passenger is shooting out of the police car you can see it is a SWAT member.

The SWAT team are the police special forces so they have better equipment. As you progress in the story the SWAT team will bring better weapons and tougher types of SWAT officers in the battle.

- Regular SWAT member: These are the standard SWAT officers. They are dressed in dark blue and on the front and the back of their uniform reads 'police' in white letters.

- Regular SWAT member 2: They almost look the same as the regular SWAT members, but they do not wear a pair of glasses or a rag. Instead, they have a helmet with glass attached to it to protect their front faces.

- SWAT sniper: These guys are the snipers. They can be recognized easily because they don't wear a helmet but a cap instead and glasses. There faces are uncovered.

Appearances: Airport (Niobe only), The Sewers, The Power Plant.

- Sewer SWAT can be easily recognized because they wear green instead of blue. Unlike the regular SWAT, these do not wear protection glasses. Instead, they wear a balaclava.

- Elite SWAT: Armored SWAT, Elite SWAT, call them however you like but these are the toughest SWAT units the police has. They have a black helmet with black glass in front of their faces, a body armor and arms and blue and white camouflage pants. On the back of their bullet proof vest, their stands in white letters, 'S.W.A.T.'

Weapons: MP5 (Only one during the Monorail section in The Airport, the second one has a SG-552.), SG-552, G36, 92FS Pistol (ghost only, the last wave in the core control room.) UMP, SS Shotgun, Offensive Grenade, 18C automatic pistol, Entry Shotgun, SMG9MM.

Appearances: The Airport (Ghost only, during section 'Monorail). In the hallway two elites will jump through the glass in the hallway.), The Power Plant.

VEHICLES: The SWAT also has a few vehicles:

Appearances: Get to the Hardline, Answer The Phone, Twins In Pursuit, Freeway Chase, Chinatown

Appearances: The Airport, Retrieving Axel, Agent on board (In the cutscene after Niobe jumped out of the plane.)

In The Matrix: Path of Neo[]

In Path of Neo, Neo will encounter the SWAT team multiple times. They will try to stop Neo at all costs. They start with men with SMGs but later on helicopters, riot shields and grenade launchers will be brought to deal with The One.

As in Enter The Matrix, also in The Matrix: Path Of Neo the SWAT team can be divided in a few categories. Each class has its own uniform and typical weapons. Here are all SWAT types:

- Regular SWAT: These are the 'normal' SWAT officers. They have dark blue suits and can be easily recognized because you can see there faces.

- Special SWAT: They are not called like that but you get the point, they are heavier armed and are tougher than the regulars. They wear a balaclava and they wear earphones, also there suits are better resistant against bullets so they are harder to kill.

- Elite SWAT: Armored SWAT, Elite SWAT. It does not matter how you call them but these are the best police units the Metropolitan Police has to send after you. There armor is even better then those from the special swat so you better engage them with hand to hand combat. They were masks and some of them riot shields as you can see on the picture.

- SWAT commanders: These guys are the commanders from the SWAT team. You can easily recognise them because they don't wear anything on there heads. They have a bullet proof vest with a green piece of clothing under it and they wear a light brown pants.

Unlike in Enter The Matrix, the SWAT is not the best special force. You still have the MP (military police). You can only see them in the levels Stuck In a Loop, Captain Ballard (captains rescue), Morpheus and Trinity (captains rescue). They wear camouflaged clothing and a red beret. They use heavy shotguns, assault rifles and grenade launchers.

VEHICLES: The SWAT team also has a few vehicles: 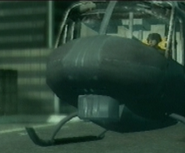 The SWAT helicopter when landed