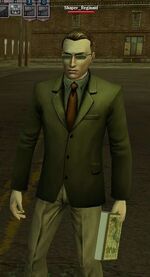 At the beginning of The Matrix Online, there was a race between the three main factions (Zionites, Machinists and Merovingians) to find shapers. A fourth organization, led by the General, also secretly found and captured shapers, who were then used to create false version of the agents and even more powerful versions similar in appearance to Neo.

Retrieved from "https://matrix.fandom.com/wiki/Shapers?oldid=34604"
Community content is available under CC-BY-SA unless otherwise noted.