Matrix Wiki
Register
Don't have an account?
Sign In
Advertisement
in: Battles, The Matrix Revolutions, Fights,
and 2 more
English


Super Burly Brawl is the name for the final battle between Neo and Smith, preventing the latter from controlling the Matrix and leading to the salvation of Zion and ending the Machine War.

After striking a deal with Deus Ex Machina, Neo entered the Matrix to face off against Smith, who had assimilated every resident, human and program. The Matrix was degrading, the code falling off as constant rain and darkness. Neo walked along a road, with hundreds of thousands of Smiths standing and sneering at him as he passed.

The Smith that now inhabited the shell of The Oracle came forward and told Neo that he had seen Neo's death at his hands, and so "that's why the rest of me is just going to enjoy the show, because we already know that I'm the one that beats you".

The two adversaries threw punches at each other, but neither of them gained the advantage. Soon both of them landed a punch on the other's face, throwing them off in opposite directions. While Neo regained his balance and stood up unfazed and unharmed, Smith landed on the hard road, breaking off chunks of asphalt.

Enraged, Smith flew up into the air. Neo followed and they both collided in mid-air, causing a shockwake strong enough to stop water droplets in their tracks. The airborne duel continued until Neo was thrown through the wall of an adjacent building, destroying several more interior walls in the process. Smith charged and collided with Neo once again inside the building, knocking Neo to the floor. Smith declared that it was Neo that taught him the purpose of life, which he defined as being "to end".

Defiantly, Neo recovered and stood with renewed determination. This time, Neo got the upper hand  and knocked Smith out of the building. Colliding in mid-air again, they caused a shockwave that destroyed the glass off the skyscrapers. As glass and rain fell upon the Smith clones below, they continued rising upwards. As they soared above the city's skyline, Neo threw Smith a considerable distance. Smith then flew towards Neo, charging with a punch like a missile, and caused a gigantic shockwave.

Smith smiled at the sight of Neo falling down. He then held Neo and began to augment his speed towards his downfall. The crash it caused was meteoric.

Dazed and supine as he lay in a rapidly flooding crater, Neo  as he watched his many clones surround the crater in which the combatants fell. Smith then began to question the reason behind Neo's persistence in fighting. Neo stood up, with great effort, and replied, "Because I choose to".

Smith and Neo then began to fight again, albeit much slower. Neo successfully threw Smith into the wall of the crater.

Smith emerged from the hole, aggravated, and began to beat Neo brutally. At one point he recognized an event from one of his premonitions and, against his will, echoed the words of the Oracle:

"Everything that has a beginning has an end, Neo."

With obvious fear, Smith recoiled from Neo, who now understood that in order to destroy Smith, he would have to sacrifice himself. He allowed Smith to assimilate him. After the assimilation was completed, the eyes of Neo/Smith and Neo (in the real world) began to glow white. Neo/Smith exploded, with other Smiths following suit throughout the Matrix. Following the eradication of Smith and the simultaneous fulfillment of the purpose of the One, the Matrix was immediately rebooted, the Mega City and all humans and programs previously overwritten by Smith returning to normal.

With the successful eradication of Smith, the Matrix was able to properly reboot to 100% operating condition, ending the Machine War and begin the Truce between Zion and the Machines. 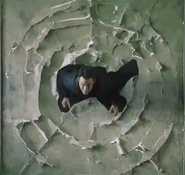