The Animatrix is a collection of nine animated short films released in June 2003 and set in the fictional universe of The Matrix franchise.

Development of The Animatrix project began when the film series' writers and directors, the Wachowskis, were in Japan promoting the first Matrix film. While in the country, they visited some of the creators of the anime films that had been a strong influence on their work, and decided to collaborate with them.[1]

The Animatrix was conceived and overseen by the Wachowskis, but they only wrote four of the segments themselves and did not direct any of them; most of the project was created by notable figures from the world of Japanese animation.

The English language version of The Animatrix was directed by Jack Fletcher, who has brought the voice actors who provided the voices for the English version of Final Fantasy X - Matt McKenzie, James Arnold Taylor, John DiMaggio, Tara Strong, Hedy Burress and Dwight Schultz. The English version also features the voices of several TV actors and actresses, including Victor Williams (TV's The King of Queens), Tom Kenny (Spongebob Squarepants, Mr. Show), Melinda Clarke (The O.C.), Olivia d'Abo (The Wonder Years), and Pamela Adlon (King of the Hill). One voice actor appears elsewhere in the franchise: Kevin Michael Richardson (whose credits include the Xbox game Halo 2) also provides the voice of the Deus Ex Machina in The Matrix Revolutions.

The characters Neo and Trinity appear in two of the sequences, voiced by their original actors (Keanu Reeves and Carrie-Anne Moss).

The most recurring character in the segments is The Instructor who voices in both parts of The Second Renaissance and World Record.

The list below contains the casting of The Animatrix segments:

The Second Renaissance, Parts I and II

Four of the films were originally released on the series' official website; one (Final Flight of the Osiris) was shown in cinemas with the film Dreamcatcher. The others first appeared with the VHS and DVD release of all nine shorts on June 3, 2003. The DVD also includes the following special features:

To coincide with the DVD release, a print of the film premiered in June 2003 in New York City at the New York Tokyo Film Festival http://archive.newyork-tokyo.com/nytff/index_flash.html.

In May 2006, The Animatrix was aired in Latin America by Cartoon Network on Toonami.

The Animatrix was also screened in select cinemas around the world for a short period of time, a week or two before the sequel The Matrix Reloaded, as a promotional event.

The cinema running order for The Animatrix (at least in Australia) differed to the DVD release. This is the order to the cinema release: 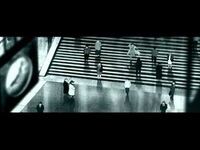