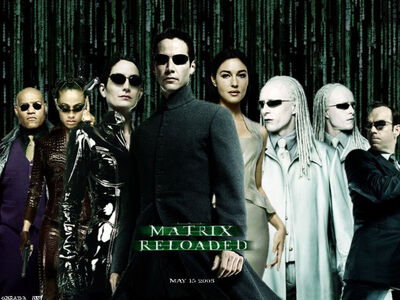 The Matrix Trilogy is one of the greatest film trilogies of all-time. It took action in cinema to another level, the story is mind-blowing and powerful, and the story is all imagery for philosophy and religion.

I remember watching The Matrix when it first released on DVD and I was devastated by the film and how the story had so much to tell and so much back-story was requested. The action scenes amazed me as I have not seen that many good action scenes in a film since Terminator 2: Judgement Day. The Matrix had unforgettable characters and a setting that is as interesting as our world that we live in today. I compared The Matrix to the original Star Wars. Both films took science fiction and special effects to another level and they both also took story-telling to a new direction that makes the story, characters, and events significant for cinema and for the viewers.

To hear that a second and third Matrix film were to made back-to-back excited me and reminded me of the Back to the Future trilogy and how the second one ended in a cliffhanger leaving room for a third. Sadly, I didn't have time to see the second film in the theaters due to school work during that time. But after my cousins saw The Matrix Reloaded, I was envious of them but they told me not to because they hated the second film saying it was boring and the story was too confusing. Once I saw The Matrix Reloaded on DVD, I still loved it. The story was expanded but for the better, the new characters were awesome to look at, and the action scenes were still amazing and exciting as ever. I can see how many fans and viewers did not like the second film due to how it tries to mix hard story-telling with action and, according to viewers, when there is action, they are excited, and when there isn't, they get bored. I heard many people talking about the conversation between Neo and The Architect to be very, very, confusing and boring. I, however, loved that scene as it answered many questions that was running in my head and explain some situations that I was looking for answers for. Overall, The Matrix Reloaded was still a fantastic film and I would recommend it for everyone.

The Matrix Revolutions was not different than the previous film. The story in this film was finished and properly wrapped up with a great finale scene and resolution to the characters that I grew to love. Everyone that I know hates this film and I argue against them saying they must look at the big picture behind the trilogy and its connection to religion and philosophy rather than just plain actions throughout. At one point, I even thought this was the best film out of the three. But after watching all three back-to-back, I quickly took back my statement.

The Matrix trilogy inspired me to look for messages and themes behind films, novels, and television shows. The Matrix trilogy offered hard story-telling and unbelievable action scenes that I don't think another film series today can offer something like it. Similar to Star Wars, I beg for more films especially prequels that talk about the creation of the different versions of Matrix, the story of the other anamolies, the war between the resistance and the machines, and how Neo was brought to the Matrix with the Architect.

This film series will forever be considered one of the greatest film franchises of all-time and more must be made.

Thank you Wachowskis for these films.

2. The strong story with a lot of information to be told.

4. The interesting characters with their metaphoric roles in the stories.

5. The philosophy behind The Matrix Trilogy.

1. Neo coming back to life to defeat Agent Smith and realizing he is The One. (The Matrix)

2.  The final battle between Neo and Smith. (The Matrix Revolutions)

3. Neo fighting against Morpheus in the Sparring Program. (The Matrix)

4. Morpheus explaining to Neo what the Matrix is. (The Matrix)

5. The Burly Brawl (The Matrix Reloaded)

6. The Battle of Zion (The Matrix Revolutions)

7. The chase scene with Trinity, Morpheus, and The Keymaker attacked by the Twins. (The Matrix Reloaded)

9. Sati, Seraph, and The Oracle looking at the sun rising above Mega City. (The Matrix Revolutions)

10. The conversation between Neo and The Architect. (The Matrix)

Top 5. Reasons Why There Should More Matrix Films[edit | edit source]

1. Keanu Reeves said that the Wachowskis are talking about a Matrix 4 and a Matrix 5 to be made and have the same cinematic action achievements similar to the first film. Show the fans that this is true and it can be done.

2. Star Wars had three prequel films after the original trilogy ended and it is still one of the most powerful franchises in pop culture. The Matrix can be no different.

3. There is so much back-story and history to be told. Explain in films. Animatrix was not enough.

5. We haven't seen Keanu Reeves in any really good films in a while. Bring him back.

Retrieved from "https://matrix.fandom.com/wiki/User:Peazeract?oldid=23712"
Community content is available under CC-BY-SA unless otherwise noted.

Ranked #7
on this wiki