World Record is one of the short animated films of The Animatrix, which tells the story of an athlete who becomes aware of the Matrix while attempting to set the world record for the 100 meters sprint. It was created by Madhouse, written by Yoshiaki Kawajiri and directed by Takeshi Koike.

Agents watch an American athlete, Dan Davis, preparing for a track race (presumably the 100 meter sprint). The Instructor, narrating the introduction, states that he was one of the few men to gain awareness of the Matrix through unconventional means.

Flashbacks are interspersed into the warm-up for the race. Dan achieves a record time of 8.99 seconds, which is then revoked when he tests positive for drug use. He consults with his father over the phone, deciding to proceed with the upcoming race. His coach Tom tells him not to race, as he feels Dan's muscles will burst if he pushes himself any more. A reporter (later seen in the stadium crowd) talks with Dan; he states to her that running makes him feels like he is "breaking free from the world".

The race starts, and Dan pulls ahead. The muscles in his legs burst, yet he keeps running, ignoring his body's pain, swiftly gaining speed against the other competitors, blowing by them in spite of his legs about to lose all function. "He cannot wake up. Do not let him wake up." commands the main agent viewing the race in the upper tiers of the stadium, having noted that his signal has become drastically unstable.

Time freezes and the Agents possess the other runners in an attempt to stop him. While they reach out for him, Dan, unaware of all events happening around him, manages to break the time freeze and outrun the agents, in spite of their supernatural strength and speed.

In the midst of winning the race, he sees the world around him blur into watery crimson numbers, lines of code and his "real" eyes open for the first time in the Real World; where he unwittingly "self substantiates" and wakes up in his pod. Still in the mindset of running the race, he continues running through the liquid, tearing free from his plugs as he does so, but is stopped by the plugs still jacked into his spine.

A nearby Docbot is alerted and clamps him back to the core of his pod, shocking him into tranquilization and to wipe his memory of the event.

Though he resists, screaming in the unfamiliar world he's found himself in, he is reconnected to the Matrix in the exact time and place he'd left: just before winning the race. His mind gone, he literally skids across the finish line, winning the race by a strong distance from the rest of the runners, but clattering mercilessly across the track after having built up so much momentum, much to the horror of his fans and onlookers.

The clock ends at his previous record being beaten with a time of 8.72 seconds. The announcer claims with much reverie "Dan Davis from the United States finishes with a time of 8.72 seconds! A New World Record!" But while Dan lay on the track broken, oblivious to his victory announcement, his vision blurs again and we are shown him still being tranquilized, still defiant, in his pod in the real world. He finally gives in and returns to unconsciousness as the tranquilization ceases.

An unspecified time later, Dan is in a wheelchair, being pushed down a Hospital hallway by a chatty nurse who keeps talking about her loving, but eccentric aunt who lives in a villa in France. In the meantime, Dan twirls two walnuts in his hand, looking dazed and out of focus with the world around him.

Unbeknownst to either of them, an Agent is watching from the other end of the corridor.

He reports to his superiors that Mr. Davis is an interesting case but not a threat, adding: "His memory of the race was expunged with no residual effects. He will never run again. He will never walk again for that matter. We will continue monitoring him for a while, but anticipate no problems." The Agent himself also sounds almost reverent when relaying: "A record that will live on in people's memories for years to come... What more could anyone ask for?"

However, as he says this Dan drops both walnuts he was curling in his hands, uttering the word "Free" – his voice sounding amplified in resonant bass. The Agent paces towards him, telling at him to sit down.

Much to the awe of both the nurse and the Agent, Dan begins to rise from his chair, effortlessly shattering the braces to his legs as he slowly stands, reaching for the sky, once again uttering in the same godlike voice "Free". The nurse begins to run to him, though the look of horror and awe is still painted across her face, just as the Agent begins to run toward him, this time yelling for him to sit down, but Dan cannot hear him. Dan's hair and clothes begin to billow as if some inner power resonates from within him.

He reaches for the sky and it appears as if he would start to fly – the walnuts at the same time begin to aim skyward with him, almost weightless. He reaches ceremoniously for the light at the end of the hall as his feet slowly begin to leave the ground. Dan then collapses to his knees, breathing heavily as the pretty nurse comes running to his aid. The Agent is now nowhere to be seen, and the screen fades to black.

Veteran animé director Yoshiaki Kawajiri came up with two Animatrix stories: Program (which he went on to direct) and World Record, and wrote scripts for both that he submitted to the Wachowskis. His original script for World Record focused on the main character's awakening to the existence of the Matrix rather than the race, which the Wachowskis thought was too similar to the awakening of Neo in The Matrix, and asked him to change it, suggesting that the character failed. Kawajiri raised his worries that there would not be enough action with the sisters, who countered that there was nothing to worry about if he and Takeshi Koike of Madhouse were directing it.

Impressed by Koike's earlier work, Kawajiri gave him direction of World Record, with free rein over the script, but requested that he wanted to see the director animate the running, in fast and slow motion. Koike storyboarded the film (which gave Kawajiri confidence in the young director), and went on to draw the main areas of body movement for the film, trying to keep a "delicate balance" of the movement of muscles in a subtly deformed style. He studied running in slow motion, and found that making the hands rather than legs swing with strong impact gave a more realistic feel to the animation.

On his trip to the United States, Koike always carried a notepad and pen around, and jotted down words and images that sprung to his mind whenever he felt inspired, saying he used them later in the creative process to push him in different ways. Inspiration for the stadium itself came from Antoni Gaudí's Sagrada Família. Characters were designed to contrast with the main character, Dan's quiet personality, such as his trainer Tom, influenced by American actor Brad Pitt. The contrast was intended to make the Dan's character more appealing.

He used a deformed style to his characters, but again struck a balance to prevent it from breaking the animation down through exaggerated deformation, and wanted to keep a realistic feel. Using only black shadow for character and background silhouettes, is another unique aspect of his style that he used on World Record, varying the amount of shadow to provide everything from facial expressions to shading for the entire scene.

Animatrix sound director Dane Davis tried to give sounds that exaggerated the physical parts of the main character's body, hearing them as he would rather than as an outside observer would, to try to get the audience to feel what the character was feeling. Composer Don Davis gave it music that was less like The Matrix than the other Animatrix films; more understated and subdued, commenting on what was on the screen. Koike was impressed by the sound, and seems to have named the main character, Dan Davis, in recognition of Dane and Don Davis.[4][3]

Animatrix producer Michael Arias saw World Record as unlike other Japanese animation: "a really original-looking cartoon", and as the blossoming of young director Takeshi Koike, influenced by Kawajiri's economy and use of powerful images and by Korean director Peter Chung, but ultimately finding his own voice.

Yoshiaki Kawajiri was impressed by the originality of the film and by Koike's going beyond everyone else's imagination. When watching the film, he says he is struck by the thought that: "there is no one who can draw cool art like him. He is out of this world!"[4] 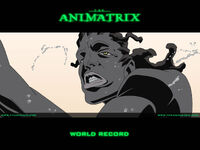 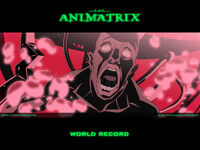